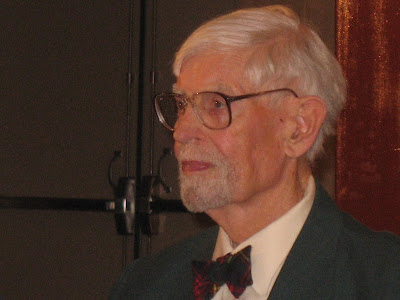 Longtime Latham Centers Volunteer William A. McClennan
Honored at 2010 Philanthropy Day on Cape Cod
Yarmouth Port resident and long-time Latham Centers volunteer William A. McClennan was named Outstanding Volunteer of the Year at the 2010 Philanthropy Day on Cape Cod.  Presented by The Planned Giving Council of Cape Cod, Mr. McClennan received a standing ovation from an admiring, sell-out crowd of 550 non-profit professionals, Cape Cod community business leaders and philanthropists, along with many family, friends and Latham staff and board members.
The annual award is presented to “a volunteer who demonstrates exceptional leadership skills in coordinating groups of volunteers for major fundraising projects for a nonprofit organization on Cape Cod and the Islands.”  McClennan was an odds-on favorite when he was nominated in one letter by 10 nonprofits across Cape Cod including Latham Centers, Child and Family Services, MSPCC, YMCA of Cape Cod, CapeAbilities, Cape Cod Community College, among others.
At Latham Centers, McClennan was instrumental in raising funds for the addition to the Latham Centers schoolhouse, the Yawkey Dormitory project, and the establishment of a cutting-edge Asinotherapy program at our Sandwich adult group home property.
“This nomination is long overdue and it is only fitting that we have joined together to put forth a true hero of philanthropy; our mentor, our friend, our inspiration, Mr. William “Bill” McClennan,” according to Anne McManus, Executive Director of Latham Centers. “Countless schools, hospitals, human service agencies and churches can thank Bill McClennan for their growth and success in building new buildings, developing new programs and establishing new initiatives.”
A graduate of Springfield College, Mr. McClennan served as a scout executive, building camps throughout the southeast that children enjoy today.  After a successful tenure at the Boy Scouts, he went on to work for a fundraising firm in New York and then established his own fundraising consulting business.
Upon retiring to Cape Cod in 1984 with his late-wife Evelyn, Mr. McClennan wasted no time in putting his accomplished fundraising career to good volunteer use. Since that time, he has worked with 19 regional nonprofit organizations in need of his energy, charm and acumen; he continues to work with six of them today, including Latham Centers.
One of McClennan’s earliest memories of volunteering dates back to 1929 at the beginning of the Great Depression.  “My mother volunteered my help in distributing Thanksgiving dinners to the poor families in our home town,” recalls McClennan. “I have enjoyed volunteer work throughout my life, recognizing the crucial part it plays in so many kinds of communities, including Cape Cod.”
(Photo courtesy of Philanthropy Day)
“No duty is more urgent than that of returning thanks.”
~James Allen
Related Posts:
Campus Hold Community Meeting to Support Mr. Sumner
Latham Welcomes Patrice Carroll
Former Colleagues Stop By Latham