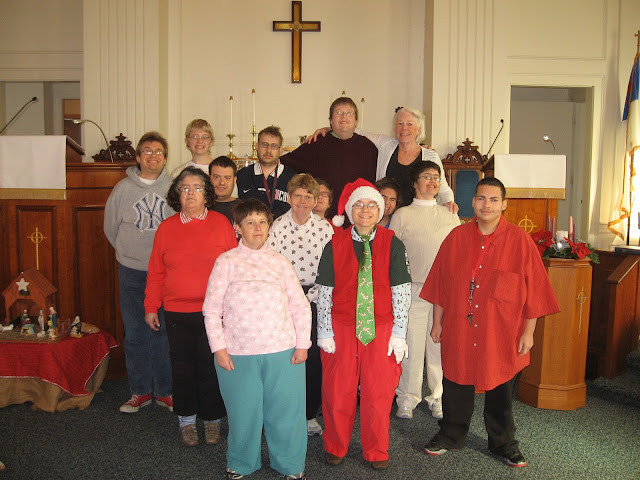 Every December the Latham Players celebrate Christmas on the first Sunday of the month.  For the past six Decembers they have been overwhelmingly received by the West Dennis Community Church to perform their special holiday show. This “gig” has become a holiday ritual and the highlight of their year of performances.

Before the performance, the Players each had their photo taken in front of the church’s lighted Christmas tree.They then went through a final rehearsal before performing in front of the congregation. Of course, many hours of practice went into the preparation for this special performance.  Penelope Chatterton, the Latham Players Artistic Director coordinated the production working with church staff on the music and choreographing of the performance. 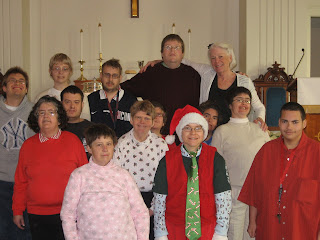 This year’s feature song was James Taylor’s “Who Comes this Night”.  Copies of the song were handed out to the congregation and the Players led them in this beautiful musical experience. Next, the Players performed their signature interpretation of “River Dance”, as the group knows it well and it is one of their favorites. The postlude was “Let There Be Peace on Earth” where all of the performers and congregants joined hands in a circle to conclude the performance. It was a wonderful finale to the celebration and symbolized the joining together with the community that is the message that the Latham Players spreads through their performances.

After the performance, the Players adjourned to the church’s basement for a festive lunch prepared by Penelope and served with the assistance of church and Latham staff, and participated in a “Secret Santa” gift giving event.

Many thanks to the West Dennis Community Church for their hospitality, the Latham staff who assisted with supporting the individuals at the performance and especially to Penelope for her dedication and passion as director of the Latham Players.

Season Greetings from the Latham Players!

“Music is the universal language of mankind.”
~Henry Wadsworth Longfellow