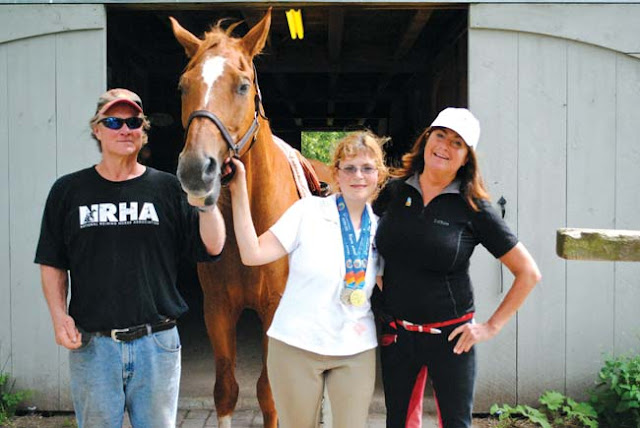 Many young women can say they ride horses. They can even say they’ve competed, and perhaps won prizes, in riding competitions. How many, however, can say they’ve won a gold medal while competing in Greece?

Zanders Pope can, and does so with her signature shy smile. That Alexandra “Zanders” Pope is a champion equestrienne is certainly noteworthy, but the fact that Pope won the gold medal in the Special Olympics World Games in Athens makes her story especially inspiring.

Pope, who recently celebrated her 26th birthday, was born with Prader-Willi Syndrome (PWS), a congenital disease that can cause delayed motor development and severe obesity, among other mental, emotional and physical issues. At one point Pope weighed nearly 300 pounds as a result of an insatiable appetite caused by the illness. Then Pope made a connection with horses and horseback riding, finding a passion there that changed her life.

According to Gerry Desautels, director of development of the Latham Centers, where Pope is a student/resident, Pope began riding horses at age 12 while still living in her home state of Connecticut.
After relocating to the Cape, Pope began training regularly at Diamondsedge Farm in West Barnstable with instructor Brenda Tri. Pope’s work at Diamondsedge has had a tremendous impact on her life.

“Since coming here, she’s had a dramatic weight loss,” said Mike Marchese, director of adult services at the Latham Centers. “She has really blossomed since working here. It’s a tremendous outlet, to get activity and to get working toward something.”

Marchese said that since many people with PWS work well with animals, Zanders’ connection with Diamondsedge Farm is a definite plus.

“She has a proclivity for working with animals,” he said. “This has been a way for her to create a vocational goal, to exercise and to raise her self-esteem, which is incredibly important.”

Indeed, when Zanders is comfortably in her saddle atop a horse named Sonata, her smile broadens and a look of pure happiness comes over her face. As she brings the horse easily from a walk to a trot to a gallop, it becomes clear that she is perfectly at home in the saddle, a state of being that led to her success in Greece, where she won a silver for A-1 Equestrian Horseback Riding, and the gold for Working Trails A-1 Division.

Pope was presented with her awards by Timothy Shriver, CEO of Special Olympics International and son of founder Eunice Kennedy Shriver. Tri said that Pope’s gold medal victory was particularly poignant given that she’d had a significant setback prior to winning, performing poorly in the events leading up to the gold.

“The trail was our worst event all year,” said Tri, who followed Pope’s progress via Facebook. “She had a tremendous recovery. She goes out and not only recovers from her setback, but gets the gold.”
The moment was a proud one for Tri and fellow trainer Gary Reilly, who spent countless hours working with Pope prior to her trip to Greece. It was Tri who had nominated her for the trip.

“I’ve been working with Zanders for almost two years,” Tri said. “She’s come a long way since the day she started, from being really shy with students to going to shows and interacting with students.”

It helps that Tri is just as stubborn and strong-willed as Pope. “She’s met her match,” Tri joked.

Pope isn’t sure what to make of all the attention her winning performance in Greece has garnered, preferring instead to focus on her beloved horses.

“You just have to be calm with them,” she said. “And trust them.”

The sentiment makes Tri smile. “She is becoming a horsewoman,” she said. “Not just a rider.”