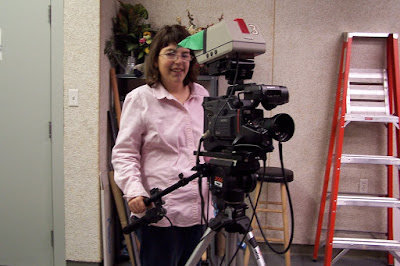 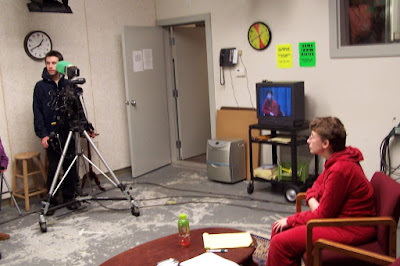 On Friday afternoons at Latham School, a group of students gather together with Educational Assistant Fred Walters to learn about television and video production. They have been excited to handle large video cameras, take “still” shots and observe video production. The group, which is part of Latham’s Friday afternoon educational “Clubs”, has made several trips to Lower Cape TV channel 17, to learn about the basic operations of a television show from behind the scenes. The students said they were impressed by how many people it takes to make even a very short video.

The students have watched several movies and paused to critique the film, watch for camera angles and discuss plot and characters. The group has also been filming around Brewster while learning about plot, story line and characterization. They have made their own kinetoscopes. These are devices which spin a group of still pictures and create the impression of action – this is how early films and all the old Disney cartoons were made. They also tried stop motion filming. In stop motion filming each picture equals one frame of film. It’s done by moving an inanimate object bit by bit and then combining still pictures by editing them into a film which shows the action.

Another project these students have started is writing their own skit based on the famous Abbott and Costello “Who’s on First”. In focusing on humor in film they have learned the importance of timing both in dialogue and action. The group is currently working on a short silent film with a music background – the students developed the story, wrote storyboards, selected and recorded the music and are completing the filming. The short film will be shown at Latham’s upcoming Arts Festival, which is scheduled for mid-June.

The Lights, Camera, Action group is part of a Friday afternoon “Arts Club” block at Latham that encourages and supports learning about the arts. Other active arts clubs are: Pottery, Drawing and Painting, Community Service, Latham Newspaper and Tap Dance.

“Those who bring sunshine to the lives of others cannot keep it from themselves.”
~James Matthew Barrie
Related Posts:
Boys Participate in Worldwide PWS Art Show
Latham Student Letters To The Cape Cod Times
Pinwheels for Peace